Backgammon Rules For Standard Play and Other Variations: An Illustrated Guide 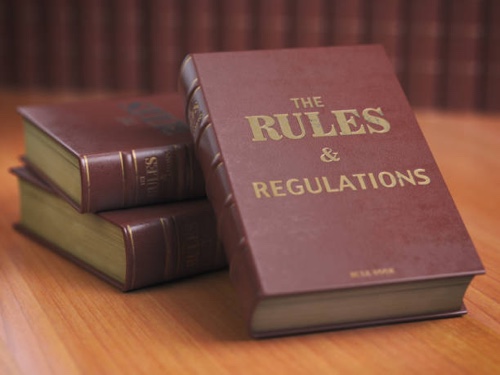 The game of backgammon can be played in a number of different variations, with each variation having its own rules.  Below we break out the rules for the following popular types go backgammon game play:

On a side note, the board we used for these backgammon rules demonstrations is the Crisloid Black and White Table top set, which can be found on their website. 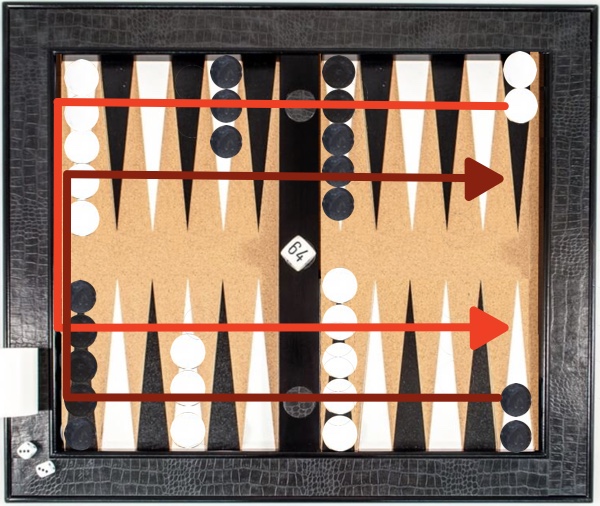 Each player roles a single die to determine who will move first. The player who rolls the highest number moves first.

If any dice the jump the center bar, land resting on the bar or the frame, land off the board, or are in any other way not laying flat on one side, both dice must be re-thrown.

Object Of The Game:

If you are new to backgammon, this probably sounds like we are speaking a foreign language, but hang in there all of these terms are explained in detail below.

On each players turn they will cast the dice and move their checkers according to the numbers face up on the dice. Each die should be considered its own individual move.

The same checker may be moved for both die, but the two numbers may not be added to make a single move. Meaning, if moving a single checker for both die, the checker must be moved in two separate moves for each of the numbers on the die, and may not even temporarily stop on a blocked point.

If a player rolls doubles, they are able to move the number on the dice 4 times. For instance, if a player rolls a pair of 2’s, they are allowed move 2 spaces 4 times. Again, a single checker may be moved all 4 times, but it may not at any time rest on a blocked point.

Moving is maybe the most complex part of the rules of backgammon, so we made this video to help understand how this works:

A single checker resting on a point is known as a blot. When an opponent rolls the correct number on the dice to land on a blot they may perform what is called a hit. When a checker is hit it is removed from the board and placed on the bar.

When the player completes their move, the opponents first move must be to move the hit checker(s) back into play by rolling the dice and placing the checker starting the count from the 24 point. Like this:

A player does not have to hit open blots, but it is certainly an important part of the strategy of the game, and can be a major setback for your opponent. Especially if they are hit in their home board and are forced to move the checker all the way around the board again.

Entering from the bar:

When a player has one or more checkers on the bar, their first move must be to reenter the checker(s) into the opponent’s home board starting on the 24 point.

Checkers are entered by moving them to an open point corresponding to one of the numbers on the rolled dice. If a player is not able to make the checker from the bar to the board because the points are blocked, they forfeit their turn.

Players with checkers on the bar may not make any other moves on the board until all of their bar checkers have been entered on the board.

All of this sounds kind of confusing, but it is really pretty simple if you see it happen once, so we made this video to help out:

Doubling and the Doubling Cube:

Each backgammon game starts with a stake of one point. When playing with the doubling cube, a player who feels they have an advantage may propose doubling the stakes. The player may only do so after the first roll of the game has been completed, and before they roll the dice for their turn.

A player who is offered a double may refuse, but if they do so concedes the game and the winner takes the point. If the player accepts the double, play continues as normal with the new higher stakes. The first double of the game takes the stakes from 1 to 2 points. When a player accepts a double, that player becomes the “owner” of the cube and only the owner may offer the next double. The second double, or redouble, would take the game from 2 to 4 points, and so on.

For a complete guide to standard backgammon game play, check out our video illustrated guide to backgammon set up, rules, and game play here!

Players have developed some additional rules that they like to play with over the years. They make for some interesting additions to the game play nonetheless.

If doubles are thrown on the first dice roll, the stakes of the game are doubled. When this happens the doubling cube is turned to the 2 side, but remains in the middle of the board without an owner. Usually automatic doubles are limited to one per game.

A raccoon is basically the same as a beaver, except it is the original offerers redouble back to the beavering player. The beavering player is then has the same option to accept or lose the points associated with their beaver offer.

The rule was designed to speed up game play by encouraging players to offer doubles. If neither player offers a double during the course of the game, both Gammons and Backgammons will only count as a single point.

Very common in match play the Crawford rule controls when players are allowed to offer doubles. If a player is one point from winning the match the next game will be played without doubles being allowed. If the player does not win the match during the Crawford game, doubling will be allowed in all games moving forward.

Here is what the Crawford Rule would look like in 5 point match:

It is important to remember that winning is winning, whether it is by one point or 3. So, in game 4 and 5 in the above example, player 2 should double as soon as possible because they have nothing to lose.

For Acey Deucey set up the board like this: 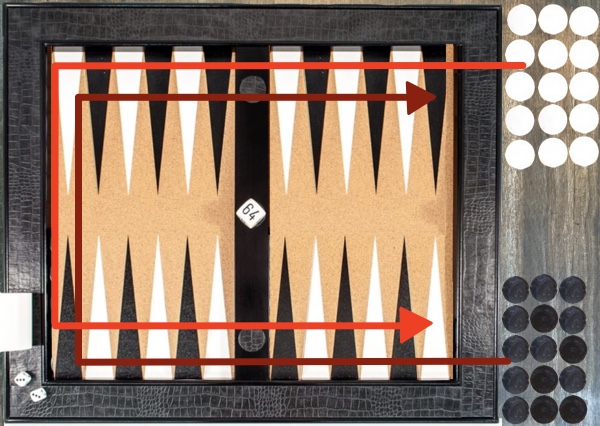 The rules for acey deuces are very similar to the standard back gammon rules. The objective, dice rules, movement, blots and hits, entering from the bar, and bearing off remain exactly the same.

The differences are in the original setup of the board, and what happens when a 1 and 2 are rolled concurrently on the dice by either player.

Acey Deucey begins with all checkers off the board entirely. Players enter a checker by beginning on the point 24 in the opponent’s home board and counting forward to the corresponding number rolled on the dice. For example, if player 1 rolls a 4-2, they could enter one checker on the 23 point and one checker on the 21 point. Once one or more checkers have been entered, players may use subsequent rolls to move those checkers forward, to enter more checkers, or both.

When a players rolls the dice and they turn up with a 1 and 2 this is considered an “Acey Deucey”, and here is how the player moves:

It is important to note that if a player is unable to use any part of their roll, they will forfeit the rest of their turn. For example, if you can move your 2 but cannot use the 1, the players turn stops there and they may not name a double and may not roll again.

On an acey deucy roll it is ok to only use part of the double the player has named. For example, after moving the initial 1 and 2, the player can name 3-3 as their double even if only three of the 3’s can be played. The player would then lose the fourth 3, wouldn’t get to roll again, and their turn would be over.

To play hyper gammon, set up your board like this: 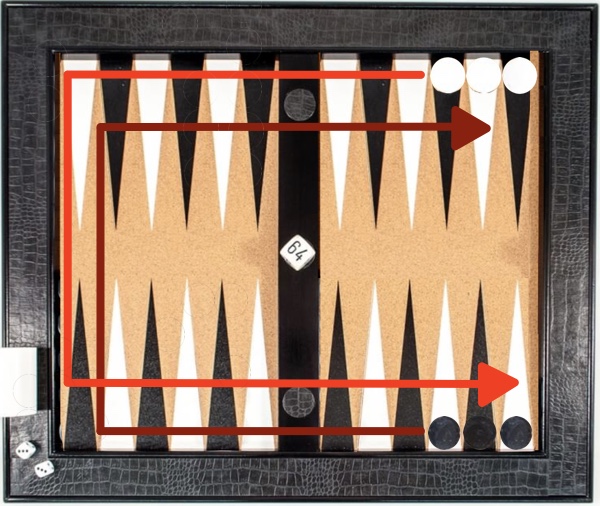 The rules for hyper gammon are almost exactly the same as standard backgammon rules. The objective, dice rules, movement, blots and hits, entering from the bar, and bearing off remain exactly the same. It is basically a much faster, and some would say more strategic version of the standard game.

The main differences with hyper gammon is that the doubling cube is pretty much always used, and the Jacoby rule is in effect.

To play Long Gammon, set up your board like this: 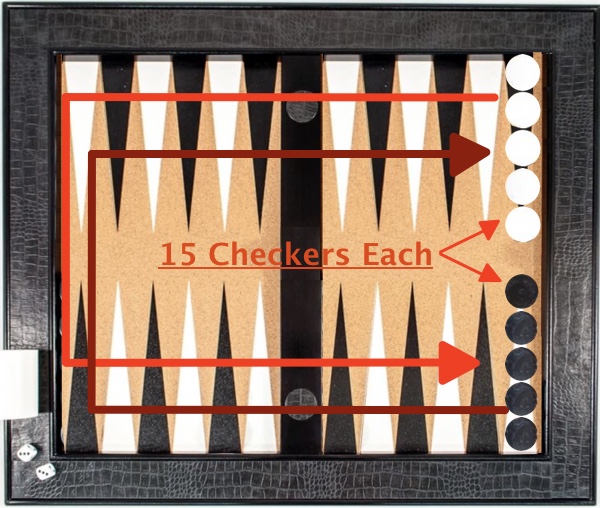 The only difference with long gammon is the setup of the board, otherwise all rules of the game remain the same as standard backgmamon rules, including doubling and scoring.

Nack Gammon requires the board to be set up as follows:

Nackgammon is considered a higher skill version of backgammon because you cannot easily run your back checkers. Position is a very important part of the game, and there is a big emphasis on priming, and less on attacking.