Backgammon Set Up, Rules, and How To Play: An Illustrated Guide 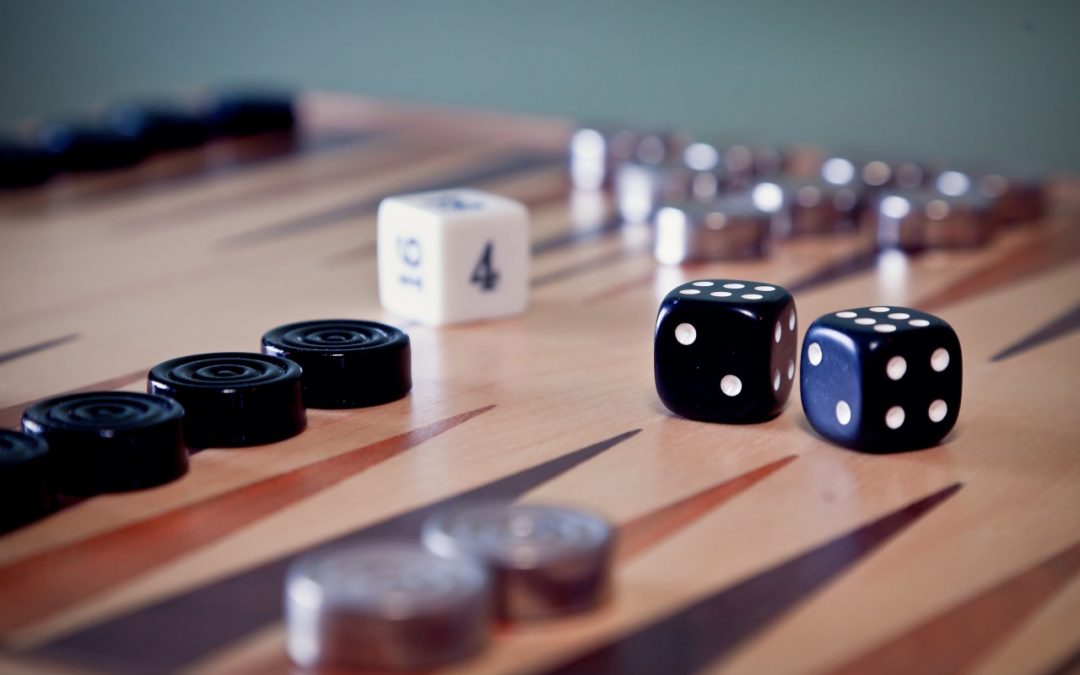 Whether you just got a backgammon set as a gift, or are dusting off the old board and need a refresher on how to set up the board or the rules to play backgammon, you have landed in the right place. Below is a comprehensive explanation of everything you need to get started, and should have you playing backgammon in minutes.

A Backgammon Set Should Include:

Understanding The Backgammon Board:

Backgammon players will generally sit across from each other with the backgammon board between them, similar to how you would set up to play chess. Imagine that each triangle on the board (commonly referred to as the points) is numbered from 1 through 24.

Begin counting with the point in the corner closest to you and the exit side. Continuing around the board ending with 24 in the upper corner of the board across from your number 1 point. Your number 24 point should be your opponents number 1 point and so on.

Each players “Home board” is considered points numbered 1-6. The area outside of your home board is called the outer board, and the ridge down the center of the board is known as the Bar (more on that later).

Players will roll the dice and move their checkers around the board, into their home board, and finally off the board completely.  The move of the checkers off the board is known as bearing off. Your vision of the backgammon board should look something like this: 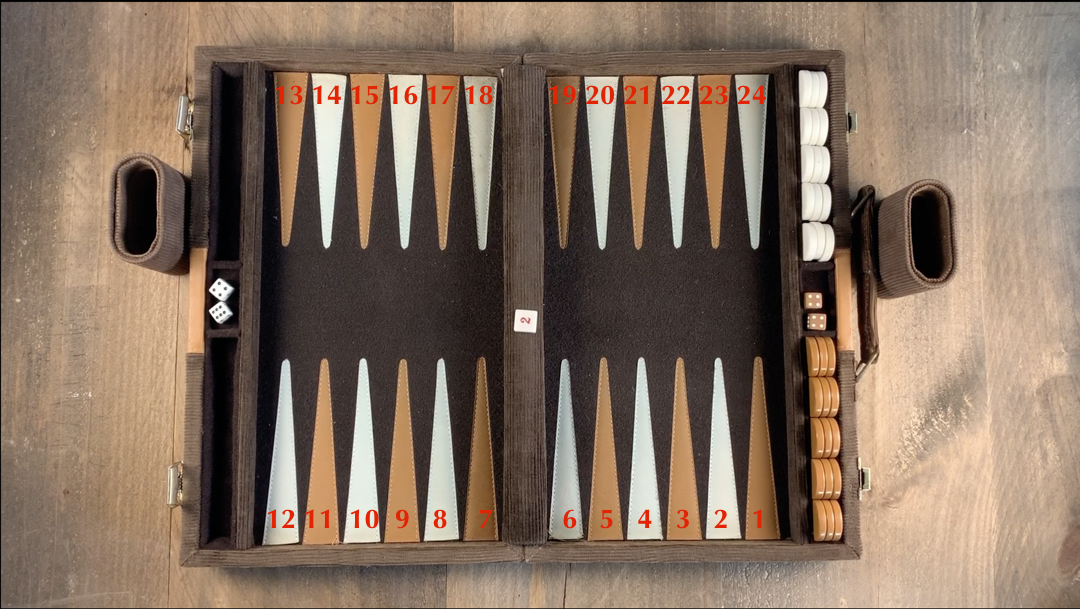 Follow these steps to set up the board and begin the game:

Once all of your checkers are in place you are ready to start playing backgammon!  Here is what your board should look like before the first dice roll of the game: 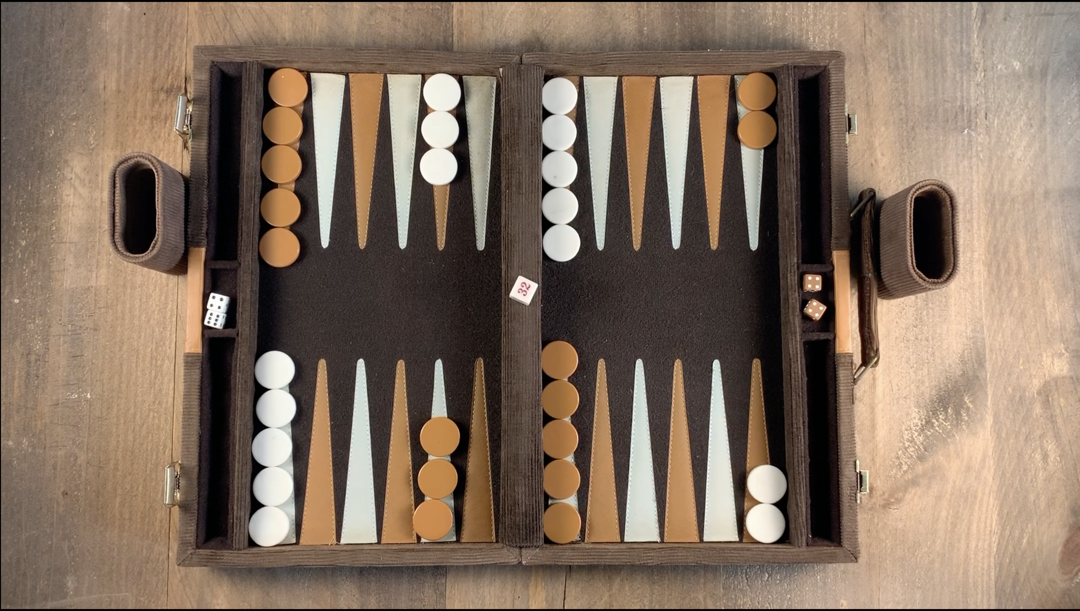 Backgammon Rules and How To Play:

The object of the game of backgammon, no matter which variation you are playing, is to move all of your checkers around the backgammon board, into your home board, and eventually completely off the board which is called bearing off. Once one player has completed bearing off all of their checkers, they are the winner of the game.

1. Roll The Dice: Players take turns rolling the dice beginning with player 1 rolling two of the dice with the dice cup. The numbers facing up on the dice roll indicate how many points a checker can be moved. Each dice and its corresponding move are separate and the two face up numbers should not be added together. If you can decide who will roll first, each player should roll one dice and whomever gets the higher number goes first.

For instance, if a 6 and a 4 are rolled. The player may move any checker 6 spaces, then move any other checker 4 spaces. The player may choose to move the same checker for both moves of their turn if no other move is available. Like this:

2. Rolling Doubles: Rolling doubles in backgammon means that a player has rolled the dice and both have the same number face up, a pair of 2’s for example. When this happens the player will get to move the number on the dice four separate times. So, if you roll a pair of 2’s you would move any four checkers forward two points each. Like this:

3. Direction For Moving Checkers: Checkers will alway advance around the board in one direction for each player, you man not move checkers backward at any time.

4. Moving To Open Points: Checkers may only be moved to open points. A point is considered open when it meets one of the following criteria: No checkers on it, the rolling player’s checkers on it, or just one of the opponent’s checkers on it.  It is important to note, if you are combining your dice to move a singe checker, the checker my not temporarily stop on a closed point.

6. Protect Your Checkers: Since starting a checker over at the beginning of the board is undesirable, players should try to protect their checkers as much as possible by leaving as few blots open as possible. Try to make sure that each point you have checkers on has at least two checkers so they can not get hit.

7. Blocking: Since a player can only move their checkers onto an open point, you can control your opponents ability to move their checkers into their home board or move a hit checker off the bar, by blocking points. Learn more about Backgammon strategy here.

7. Bear off to win: Once a player has move all of their checkers into their home board, they can begin to move them off the board. This move is called bearing off the board. In order to bear off checkers, you must roll the number of the points the checkers are sitting on or higher.

If you have two checkers on your number 6 point for example, and you roll a 6 and a 1, you can bear off the checker from point number 6, and then either move the other checker on the number 6 point to the number 5 point, or move another checker on the home board. You can continue to move checkers down to the number 1 point, but you will have to roll a 1 to bear them off the board and win the game. If checkers are left sitting on points numbered below the number rolled on the dice, the player may bear those checkers off.

Here is a video that covers each step of the game play rules above:

While this post gives you all of the basics you will need to get started on a game of backgammon using the standard game play rules, there are a number of other special rules and backgammon variation games that you can play as well.  Check out our post to find out everything you need to know!

If you are new to the game, and are interested in developing a winning backgammon strategy, check out this post.

Finally, with the digital age many players are used to playing online rather than in person.  Many people don’t own a physical backgammon set, but they make the perfect gift and nothing beats passing down the tradition of this game to kids.  There are many options available, and to help wade through them we created this post breaking down the top boards for every budget.  The board used for this demonstration was actually found on Facebook Marketplace!

The Ultimate Guide To Backgammon Game Board Sets For Every Budget

Options abound when it comes to choosing a backgammon set. We grouped our picks by the following categories: Budget Tabletop Travel Leather Luxury Wood Vintage If you already know what you are looking for jump ahead by clicking any of the categories of backgammon sets...
Read More